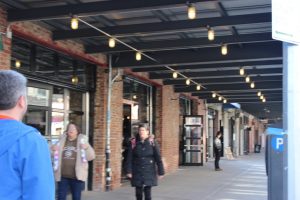 NYC is going through a food hall heyday of sorts. Gotham West Market spurred the trend when it opened in 2013; Berg’n followed suit when it launched in Brooklyn this summer; Eataly is expanding with a branch in the World Trade Center later in the year; and Anthony Bourdain is even getting in on the act with the 50-vendor Bourdain Market, which will debut late in 2015. Three-month old Gansevoort Market is a nice, compact addition to the mix, with about two dozen vendors ranging from street carts to dining counters to grab-and-go kiosks.

Since opening in October, the vendors have been slowly rolling in, and the space is now fully occupied and alive with commerce. Its garage door frontage will allow for some fresh air to circulate in the mild weather, while the interior is a build-out of reclaimed wood beams, corrugated metal, skylights and indoor vines adding a touch of nature. Here’s a look at some of the most notable stops within.

About the Author: admin